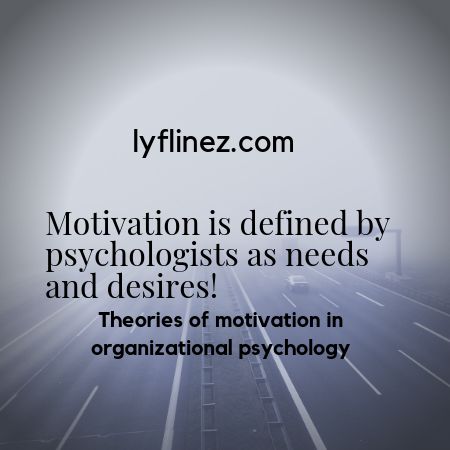 Motivation is defined by psychologists as needs and desires

Motivation is defined by psychologists as needs and desire from overt behavior and to identify specific motives, we must infer specific needs.

Thus a man activity searching for food is assumed to be hungry;

A man who regularly votes for the conservative candidate we assume to be caution,

A boy who eagerly reads popular science magazines to be interested in mechanical things.

Organic needs, attitude, and interest all these are motives that spur the individual to action and direct activity by making one course of behavior more likely than another. Motives operate from within the individual.

In which S represents the stimulus.

Org the organism being stimulated and R the response.

MOTIVATION IS DEFINED BY PSYCHOLOGISTS AS THE MOTIVES

Now we will discuss what is motives and how motives develop.

The motive is a drive or directing tendency within the organism. This inner set is often so much stronger than the immediate stimulus that the response seems to be out of all proportion to the stimulus.

Motivation is defined by psychologists as the stimulus which we see may sometimes be merely the spark that sets off the explosion. A hungry dog, for example, seizes a piece of meat and devours it ravenously. Meat is the incentive or stimulus to which the hungry animal reacts

Motives vary from unlearned physiological needs to highly organized system of ideas. At the extreme persistent bodily tensions, which initiative response basically native and unlearned. At the other are attitude, goals, purpose, ambitions, and various complex habits, which express themselves in response acquired, by the individual in a social setting.

The social motive may be as powerful a determinant of behavior as the organic need. The politician obsessed with religious zeal is no less strongly motivated than is an angry man or “boy-crazy” girl.

Physiologists use the term homeostasis to describe the body’s tendency to maintain a balance or equilibrium among its internal physiological states and the environment. This self-regulation is seen most clearly. Perhaps, in temperature control.

The usual body temperature is about 98 degrees if an individual gets too warm, he sweats and the evaporation cools the body. If he gets too cold, he shivers, thus stirring the body to action and generating extra heat.

The concentration of sugar in the blood pressure level and the oxygen supply are auto-metrically regulated to protect the organism and to prevent extremes.

Homeostasis in Motivation is defined by psychologists as a concept, serves to describe much instinctive be-heavier. When we are hungry or tired of example, balance or equilibrium is lost until we eat or rest. Organic needs or cravings constitute dependable drives.

Within Organizational psychology, the study of employee motivation represents one of the most important topics in the disciplines. These motivational theories actually determine the perspective of I/O psychology. There are several reasons for this.

First, motivation is defined by psychologists as is the key to understanding many forms of behavior in organizations. It helps us to understand the dynamics of job performance, absenteeism, turnover, and even counterproductive behavior.

Second, an understanding of the dynamics underlying various forms of behavior enhances our ability to predict these same behaviors.

It also helps in selecting new employees and considering the promotion of current employees.

The third reason to study employee motivation is that understanding the motives behind the behavior is an important first step toward influencing it.

If an organization Knows that employee is highly motivated by financial incentives, this information can be used to influence performance.

MOTIVATION IS DEFINED BY PSYCHOLOGISTS AS-CONCEPT OF MOTIVATION AS THEORIES

According to Pinder 1998, motivation determines the forms, direction, intensity, and duration of work-related behavior, while defining and understanding employee motivation.

It is important to consider what forms of behavior organizations wish to influence. Numerous theories of human motivation have been developed over the years.

Two main theories of motivation will be discussed below.

Maslow, Alderfer and McClelland’s theories of motivation are called need-based theories. A brief description is given below.

Maslow proposed his well-known need hierarchy theory as an explanation of the forces driving human behavior. Maslow’s theory was not designed specifically to explain behavior in the workplace.

It is certainly intuitively appealing and represents an insightful statement about human nature. But the theory has fared very poorly as a predictor of work behavior.

This theory allows for the possibility that needs do not have operated in a strict hierarchical fashion. ERG theory has served as a foundation for future theories in which need satisfaction is proposed to be a central component.

In its needs are not arranged in a hierarchy, so all the needs can influence us at the time. Therefore, the satisfaction of one set of needs does not automatically lead to the emergence of higher needs. Alderfer said that satisfying a need may increase its strength.

Achievement motivation is a characteristic of successful executives. It means a desire to accomplish something, to do a good job, and to be the best. People who have a high degree of the need for achievement derive great satisfaction from working to accomplish some goal, and they are motivated to excel in whatever task they undertake.

McClelland’s research identified three major characteristics of people who have a high need to achieve:

These theories propose that the key to understanding motivation lies in the “content of employee jobs”. These theories offer job satisfaction as an explanatory mechanism linking job content and motivation, as they have been developed specifically for the workplace.

Herzberg presented his motivation-hygiene theory in 1968. He said that the primary source of motivation in the workplace was the content of people’s jobs.

He was of the opinion that financial incentives had the power to “motivate” people in the sense, that they kept them on the job and perhaps prevented them from complaining. To truly motivate people, the content of jobs that people perform was the key.

He proposed that the work environment could be divided into two general categories.

It includes aspects of the work environment, such as pay. Fringe benefits, relations with coworkers and essentially everything else that is distinct from the content of an employee’s work.

The second category of the work environment is motivators. Motivators reside primarily in the content of a person’s job.

In order to motivate an employee, an organization must design work in a way that builds in motivators and thus makes work content intrinsically rewarding to employees.

Level of challenge, level of autonomy or discretion intrinsic, interest, opportunities for creativity.

YOU CAN ALSO READ

It has become the most influential job-based theory of motivation in I/O psychology presented by Hackman and Oldham. Job characteristics theory had evolved over several years.

The concept of “Requisite Task Attributes”, that means a set of job dimensions that they believed to be motivating to employees.

With this concept, he proposed what is generally considered the most immediate precursor to what eventually became Job characteristics theory.

This theory extended this earlier work by proposing the mediating linkages between job characteristics and outcomes, and by specifying moderators of individual differences. A brief sketch is given below.

Motivation is defined by psychologists as needs and desires. Motives may be physiological and psychological. Motivational theories in organizational psychology are also mentioned.